Lincoln’s ‘Disney World of Gift Shops’ is closing its doors for good.

Often coined that because of the immense selection of gift and fashion items, Four Star Card and Gift Gallery will end it's  Owners Retiring/ Store Closing sale this Saturday July 25, 2020 at 5 pm.

Owners James and Kris Plucknett say it is time to retire.

“We have been truly blessed by being able to serve our many loyal customers and this community through Four Star Card and Gift Gallery and Four Star Drug. Four Star has been more than a business to us,” Plucknett says.

“On behalf of our employees, we wish to thank you for your patronage and support for all these past years. Four Star has had a lot of positive comments, won numerous awards and received incredible support for our store and the service our outstanding staff has provided. It has been our honor to serve you,” he says.

Four Star Card and Gift Gallery has won numerous awards through its almost 26 years, including being named Nebraska Retailer of the year in 2018 for the 1st Congressional District by the National Retail Federation. Named Outstanding Gift Retailer in the Midwest by the Kansas City Gift Market in 1999 (the only time they issued that award)

The Plucknett’s say they are not closing the store due to poor business, in fact, in the last two years the store has recorded the highest sales in its history, but a number of other factors pointed to now is the time to retire, so they announced their plans to retire after Valentine’s Day in February 2020 and began the Store Closing Sale the first of March.

Covid-19 came along in Mid-March and the sale was delayed while the store was closed in April due to Covid-19. The store re-opened May 7th and continued their closing sale until July 25th.

“The retail business is very demanding and we have had to work a lot of hours to operate it at the level we have and after 50 years it is just time to move on to the next phase of our life.”

Thank you for the support of the customers and especially to our all of the great Four Star Employees.

From the very start of Four Star Drug by my father in 1961. through the last day for Four Star Card and Gift Gallery July 25, 2020, Four Star has been a Family organization- Our customers were treated like family, and all our Co-Workers truly became part of the Four Star family.

This feeling of family remained and grew throughout our history and was especially strong in the closing months.

Thank you to everyone in the Four Star Family for your help in making the shopping experience at Four Star a very special one and our journey as owners one we will never forget. 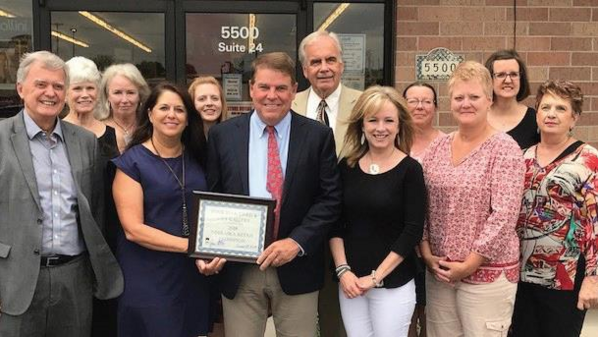